Following the success of the session, it was with Mahogany that KAWALA released their debut EP ‘D.I.L.Y.D’ (or ‘Do It Like You Do’) in 2018, which immediately set out what they were about – sad but optimistic indie with heart, rhythm, and harmony. That record and 2019 follow-up ‘Counting The Miles’, coupled with their infectiously joyous live shows, have secured them a growing and loyal fanbase – one that has started to provide a haven for outsiders.

“We didn’t get into music to make an angled statement to change the world,” Daniel explains. “But what I’ve found at our gigs this last year is this surge of people who don’t feel 100 percent accepted in society. We see people with Pride flags at our shows and we get messages saying, ‘Your music helped me’. That’s better than anything.”

They put people finding comfort in their band down to the nature of their music. “It’s hopeful,” Jim says. “We have a lot of songs where there’s a journey, like each song on ‘Counting Miles’. I think that’s a good message people can grasp, even if it’s just something as basic as finding yourself going from being unhappy to happy – that’s a journey in itself.”

Building a community around their band is something KAWALA have already begun to do in London. Their friends and family are also their collaborators – their friend Frank created the artwork that adorns their EPs, backdrop at their shows, and their merch, while Jim’s brother directs their videos. “If you know someone who can do it, there’s no point getting a big name to do it,” Daniel reasons. “It’s nice to have that community. “There are artists we know in North London as well – rappers, musicians, photographers, artists and other bands in a similar place to us – that we can feel a sense of togetherness with.”

darker, dynamic ’Animals’ as being KAWALA’s “Lizzo moment”, in which they reassure someone they “don’t need that abusive male in your life”.

Lead single ‘Heavy In The Morning’, meanwhile, tackles exactly what the title suggests – that feeling of not being able to get out of bed in the morning and face the day. “It’s broader than just being about mental health,” Daniel explains. “It’s more of a general feeling – that can’t be bothered feeling.”

Although they describe writing lyrics as being “one of the hardest things”, especially considering both Jim and Daniel sing every line, they got some reassurance in their methodology recently. “We’ll usually pull lyrics out of what sounds right,” Jim says. “I was always a bit uncomfortable about that until I read a book that said that’s what Paul McCartney and John Lennon used to do.”

“It’s easy to write lyrics when you care about what you’re writing about,” Daniel adds. “We can make sounds all day long but the songs that have hit people best have always been the ones where we knew what we were talking about. We both had a lot we really wanted to say on this EP.”

With early support from the likes of NME, BBC Radio 1’s Jack Saunders, and Clash, plus support slots with George Ezra, The Vaccines, and Dodie, a Main Stage set at Reading & Leeds 2019, and their own sold-out headline shows across the UK under their belts, the future looks very bright for KAWALA. Their aims, though, are humble. “If we keep making music that people enjoy, that makes me happy enough to keep doing it,” says Jim. He pauses, then adds completely straight-faced: “Also world domination.” 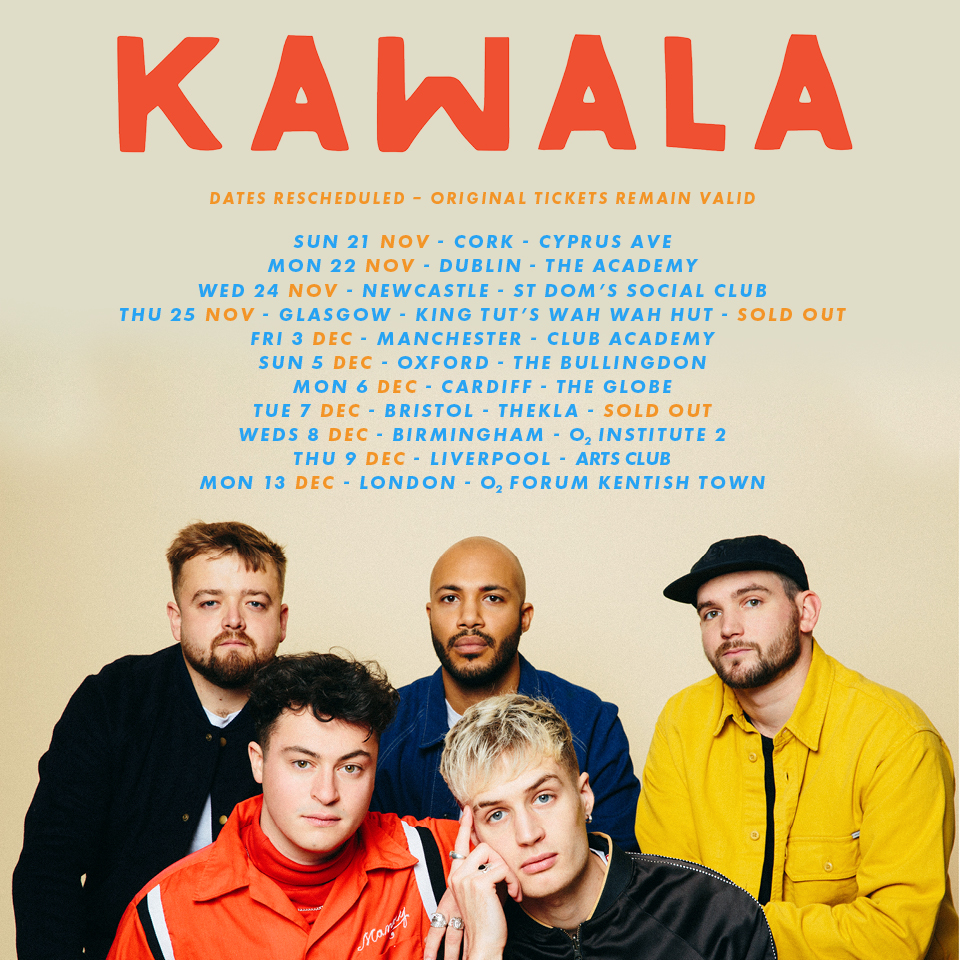