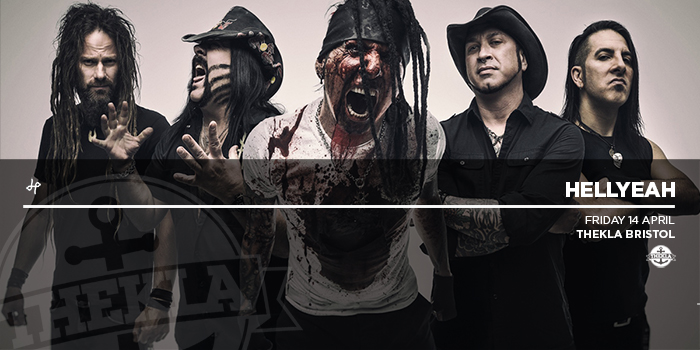 Heavy metal “supergroup” Hellyeah formed in 2006 in Dallas, Texas around the talents of Mudvayne’s Chad Gray (vocals) and Greg Tribbett (guitar), Nothingface’s Tom Maxwell (guitar) and Jerry Montano — the latter also played with Danzig — and Pantera/Damageplan drummer Vinnie Paul Abbott. The group’s self-titled debut was released in April 2007 on Epic Records. Shortly after the album was released, Montano left the band and was replaced by Damageplan bassist Bob Zilla. With a new bassist in place, Hellyeah began to work on new material, and in 2010 released their sophomore album, Stampede. Released in 2012, the Eleven Seven Music-issued Band of Brothers found success on the stren…gth of the singles “War in Me” and the propulsive title cut, and 2014’s Blood for Blood saw the band part ways with Tribett and Zilla, the latter of whom was replaced by Bloodsimple bass player Kyle Sanders. In 2016 the band issued its fifth studio long-player, the brooding and savage Unden!able, which included a blistering cover of Phil Collins’ “I Don’t Care Anymore” that featured guitar parts from late Pantera shredder Dimebag Darrell.