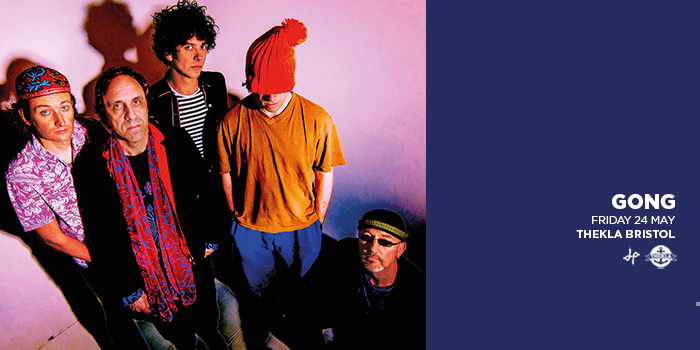 Camembert Electrique contained the first signs of the band’s mythology of the peaceful Planet Gong populated by Radio Gnomes, Pothead Pixies, and Octave Doctors. These characters along with Zero the Hero were the focus of Gong’s next three albums, the Radio Gnome Trilogy, consisting of Flying Teapot (1973), Angel’s Egg (1974), and You (1975). On these albums, protagonist Zero the Hero is a space traveler from Earth who gets lost and finds the Planet Gong, is taught the ways of that world by the gnomes, pixies, and Octave Doctors, and is sent back to Earth to spread the word about this mystical planet. The bandmembers themselves adopted nicknames — Allen was Bert Camembert or the Dingo Virgin, Smyth was Shakti Yoni, Malherbe was Bloomdido Bad de Grasse, Tritsch was the Submarine Captain, and Pyle the Heap. Over the course of the trilogy, Tritsch and Pyle left and were replaced by Mike Howlett (bass) and Pierre Moerlen (drums). New members Steve Hillage (guitar) and Tim Blake (synthesizers) joined.

After You, Allen, Hillage, and Smyth left the group due to creative differences as well as fatigue. Guitarist Allen Holdsworth joined and the band drifted into virtuosic if unimaginative jazz fusion. Hillage and Allen each released several solo albums and Smyth formed Mothergong. Nevertheless the trilogy lineup reunited for a few one-off concerts including a 1977 French concert documented on the excellent Gong Est Mort, Vive Gong album. Allen also reunited with Malherbe and Pyle as well as other musicians he had collaborated with over the years for 1992’s Shapeshifter album. Hillage also worked as the ambient-techno alias System 7. A number of Gong-related bands have existed over the years, including Mothergong, Gongzilla, Pierre Moerlin’s Gong, NY Gong, Planet Gong, and Gongmaison. During the new millennium Gong material continued to be released, including Live 2 Infinitea issued in fall 2000, as well as numerous reissues. I Am Your Egg appeared in 2006 from United States of Distribution. Meanwhile, Gong in various lineups featuring Allen and Smyth continued to perform and record intermittently, up to final album I See You released in 2014, before Allen succumbed to cancer in Australia on March 13, 2015 at the age of 77.