The fifth full-length from Ra Ra Riot, Superbloom partly takes its name from a 2017 phenomenon in which patches of the Southern California desert exploded with wildflowers, a display so immense you could see it from space. “The superbloom happened around the time we started working on the album, and we loved the idea that this dry wasteland could momentarily become something overwhelmingly beautiful,” says Santos. But while Superbloom is populated by flowers of all kinds—including those with poisonous or mind-altering properties—its title also speaks to a metaphorical flowering: the purposeful transformation the band experienced in bringing the album to life.

As their most extravagantly realized work to date, Superbloom finds Ra Ra Riot taking a decidedly pop-minded approach to the album-making process. In a departure from the more intimate production of their previous releases, the New York-based band enlisted an entire lineup of collaborators, including their longtime creative partner and former Vampire Weekend member Rostam Batmanglij (HAIM, Frank Ocean) and the production/songwriting duo Kieron Menzies and Dean Reid (Lana Del Rey, Lykke Li). “In the past, we’ve sometimes gotten in our own way or held
back from our poppier tendencies,” says Miles. “Working with all these different people and adding their ideas allowed that side of our music to fully manifest itself, in a way that felt really exciting.”

In shedding their inhibitions, Ra Ra Riot ultimately created an impossibly radiant album, a selection of songs powered by the most imaginative yet indelible melodies they’ve ever dreamed up. At the same time, the band maintains the offbeat eclecticism they’ve embraced since first forming as a
baroque-pop outfit back in the mid-2000s, embedding Superbloom ’s lavish arrangements with elements of psychedelia, new wave, punk, and country.

On “Belladonna,” Ra Ra Riot channel their kaleidoscopic sensibilities into a moody but shimmering epic, one that echoes the serendipity that propelled the making of Superbloom . “‘Belladonna’ came from a session where Dean played a beat and asked if I had any lyrics I’d been working on,” says Miles. “I pulled up my Notes app and the first note was a list of movies, and at the top was Belladonna of Sadness —this very dark, pre-anime movie from the ’70s. The word ‘belladonna’ worked just right with the melody we’d been riffing on, and it all came together from there.” With its flashes of elegant frenzy, “Belladonna” also graces its bridge with a bit of storytelling from sound artist Erico Wakamatsu, a piece of spoken-word the band stumbled upon while constructing the song. “We’d already figured out the length of the bridge, and when we added the story it fit exactly,” says Miles. “It was just way too perfect to overthink.”

A sense of charmed spontaneity also infuses songs like “Bitter Conversation,” a glorious burst of pop idealism built on massive harmonies and rhythms that pulse with riots of color. But despite the irrepressible joy of “Bitter Conversation,” much of Superbloom embodies another connotation of its title word: the ephemeral nature of beauty and magic. One of Superbloom ’s most bittersweet tracks, lead single “This Time of Year” was first written as a Christmas song, but later morphed into a harmony-heavy anthem of nostalgia. With its melodies primed for melancholy reminiscence, the song’s reinvention was sparked by Miles’s uncovering of some old letters and photos. “My parents are moving out of their house, so I’d been digging through a lot of stuff I’d saved up,” he says. “That song mostly came from thinking about how certain times of year can pinpoint these very specific moments in your life, and bring up nostalgia for old relationships.”

Another instance of dreamy reflection, “Backroads” unfolds in gently detailed storytelling that telegraphs the teenage thrill of driving aimlessly. “When I was growing up, if we didn’t have anything to do on a Friday night we’d just drive around for hours, listening to music and trying to
get lost in another town or in the woods,” says Miles. “I wanted to convey that feeling of trying to escape but also having all these limitations, whether it’s a state line or a low gas tank or something emotional that’s holding you back.” On “Bad To Worse,” Ra Ra Riot approach the theme of driving from a more wearied perspective, recounting a nine-hour journey from Washington D.C. to the outermost point of Cape Cod. “It’s about watching the world from the window of the car or bus, and how there’s a familiarity to everything but it’s never the same as it once was,” says Miles. One of the most simply adorned songs on Superbloom , “Bad To Worse” offsets those wistful lyrics with bright beats and warm textures sculpted with the help of Batmanglij’s vast collection vintage synths.

Ra Ra Riot also conjure an unshakeable longing in “Flowers” (a psych-country serenade that fuses fuzzed-out riffs and tender violin tones) and “Gimme Time” (a falsetto-laced slow-burner that captures the singular ache of watching the one you love speed off forever on the back of a Ducati).
In each song, as with much of Superbloom , the band instills that longing with an undeniable hope, a hint that happiness in the past might point to the promise of the future. But on “An Accident”—as in “Maybe I could make it look an accident/Wouldn’t that be nice?”— Superbloom turns nearly
operatic in intensity, offering up an epic sigh of a song made all the more mesmerizing by its many subtle flourishes (cascading guitar lines, soft swells of synth). And on “A Check For Daniel,” Ra Ra Riot careen through countless moods, building a beautifully strange outburst from robotic rhythms and spiky guitar riffs. “I was in a really bad place at the time—there was breakup, I was stuck in a house where I felt like a stranger,” says Santos of the song’s origins. “‘A Check For Daniel’ ended up being about finding a place that felt more like home, and being able to start over again.”

Another track originated by Santos, “Endless Pain/Endless Joy” arrives as Superbloom ’s most chaotic moment: an anti-anthem driven by frenetic rhythms, furious guitars, and a fantastically unhinged vocal performance. The track’s raw energy partly springs from its recording, for which Ra Ra Riot holed up in a carriage house behind Miles’s parents’ place in rural New Jersey, the same spot where they created their earliest material. “Going back there felt like a cool counterpoint to working with all the pop producers in L.A.,” notes Santos. “It was fun to be in this very familiar environment that we associate with our beginnings, after working in a way that feels like the future of our band.”

In the spirit of honoring their past, Ra Ra Riot recently completed a sold-out national tour to celebrate the 10-year anniversary of their 2008 debut The Rhumb Line . Looking back on the early days of the band—assembled by Bonacci when they were all students at Syracuse University—Santos
recalls the utter lack of cohesion in their first few sessions. “We had no shared musical vocabulary at all,” he says. “We were just a bunch of strangers thrown into a room together, trying to figure out what worked. In retrospect that was probably a good thing, because if we had some specific idea of what we wanted to sound like, it wouldn’t have set us up to grow.”

Throughout Superbloom , Ra Ra Riot show the depth of their growth in their immaculate songcraft and elaborate production. And in the album’s more outlandish elements—the K-pop influence and bit-crushed components of “Dangerous,” the otherworldly effects and eerie backmasking of “War & Famine”—the band fulfills a long-held mission of constantly expanding the possibilities of pop. “It’s important to us to make really diverse records, instead of putting out the same thing over and over again,” says Miles. “In the past, if we wanted an outside writer or producer to help us achieve that, we had to accept that the result would be extremely different from what we’d create on our own. But now we have enough of a history and a catalog that we don’t have to give up on our vision to make that happen, and it’s taken everything to a whole new level of exploration.” 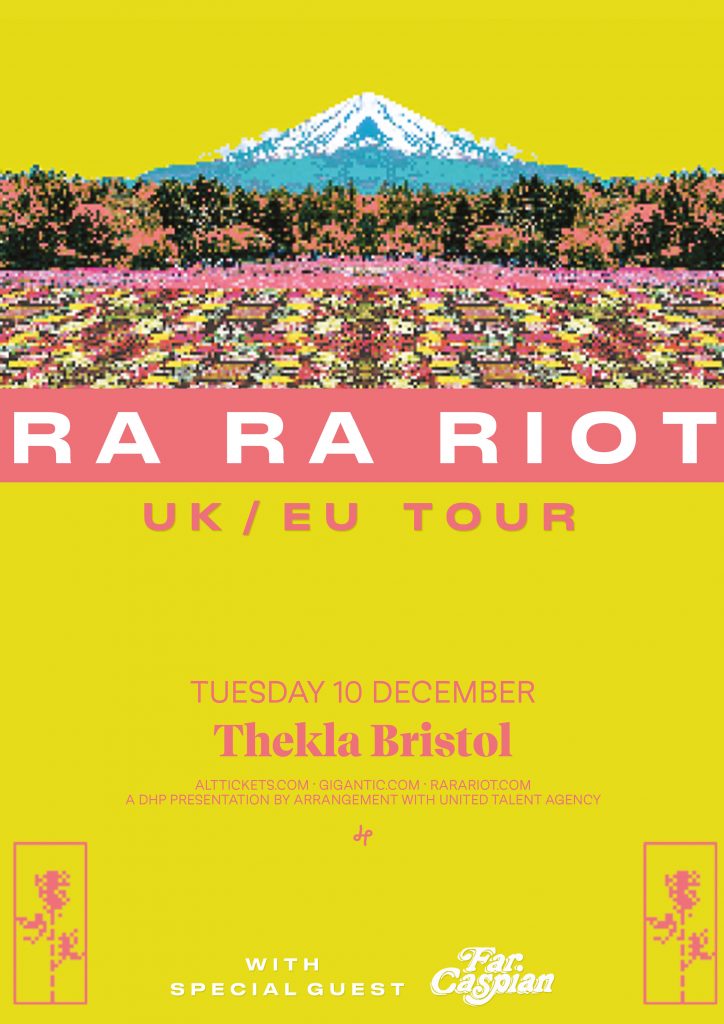